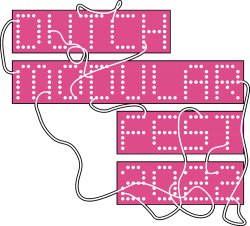 DMF started out in 2017 as Ginkofest, organized by Jan Willem Hagenbeek from Ginkosynthese at the location of his atelier, The Besturing. He is the godfather of the festival and was the bright mind that started it all. When the first festival was a success, he had a plan to organize a Dutch version, organized by all the - then - modular event organizers in the Netherlands. To join forces to organize a real Dutch modular festival. Ginkosynthese from The Hague joined forces with Modulation. from Utrecht, Noodlebar from Rotterdam, ModuLab from Eindhoven, and Voltage Control Amsterdam from Amsterdam.

2018 Saw the light of the first DMF, located at the Besturing in The Hague. Three days of modular music performances, a market with module makers and people from the DIY community, art, and workshops. in the run-up to the festival, Menno Zijlstra was added to the organization, specialized in audio technique.

2019 was a very successful festival, where the Sunday was canceled from the roster in favor of a modular club night at Pip Club. A bigger crowd and more exhibitors on the market. DMF grew bigger and the organization became more complex. Because of this, Jan Willem decided to leave the organization because he felt, the festival wasn't his little child anymore, and he wanted to focus on his brainchild Ginkosynthes. With the Leave of Jan Willem, DMF wasn't able to use the location of the previous installments of the festival for the upcoming iterations.

For DMF 2020 we found a new home and a new city. From 2020 on, DMF found a home at TAC in Eindhoven. A city in the south of the Netherlands with a big electronic legacy. It's used to be the home of electronics giant Philips and features an important role in the history of Dutch experimental electronic music. Dick Raaijmaker (aka kid Baltan) worked at Philps in the electro acoustics department and used the (famous) NatLab for his first sonic endeavors. Due to the renovation of TAC, DMF 2022 will not take place in Eindhoven.

For DMF 2022 we have found a new home at the headquarters of Uncloud in Utrecht. In the former psychological and criminal observation clinic Pieter Baan Centrum. This is a fantastic venue and we are very happy we are able to use this space.